In writing about inexpensive forms of advertising or promotion, I asked you to think about “sudden attacks sprung from hiding.” Did the term “ambush marketing” come to mind?

It’s a form of marketing or advertising that lets you enjoy the benefits of sponsoring major events, without actually paying big bucks to be a sponsor. I know, I wrote about ambush marketing a few posts back, but it deserves revisiting.

Briefly, during the 1990s, a clever Australian bloke named Kym Illman lost his marketing job at a radio station, so he started up a small company – Messages On Hold – to produce advertising messages for companies to play to callers on hold. Using ambush marketing (basically getting his logo front and center at major events) his was soon the #1 on-hold messaging company in the Asia Pacific region.

The question I posed was: Would ambush marketing work for a hosting company? And if so, how?

Naturally, my inbox was flooded with responses (is there an emoticon denoting heavy sarcasm?). So I decided to see if I could come up with a suitable campaign.

First, it helps if you have a fun or flashy name or logo, or both – like Go Daddy, or Host Gator. So how about a fictional hosting company called Gator Mommy, based in Los Angeles?

A quick check shows that during this summer there will be several festivals, professional baseball games, professional soccer games and a major tennis tournament happening in and around L.A. You can buy tickets to those events, give them away along with some highly visible form of your logo and offer a cash prize to those who manage to get their picture, with your logo, on TV or in the newspapers.

I saw a Hallowe’en (yup, that’s how we used to spell it) photo of a small dog with its hind legs in a costume that made it look like it was being swallowed by an alligator. Get one of those costumes, deck out a model in some gear bearing your logo and have her (or him) strut around outside the events with the gator/dog on a leash.

Or, have someone dressed up like a mom push around a stroller with a real or fake alligator in it. Or, challenge people to take part in an alligator wrestling contest – stay in the ring for two minutes to win $100 – then hire a wrestler, dress him up in a ‘gator costume and stage the match very near the event you’re trying to ambush. Of course, these idea’s only work if your company is named Gator Mommy. But you get the idea. And, yes, I know this sounds a lot like Guerilla Marketing (thank you, Jay Levison). In a way it is, but the fact of ambushing major events puts a different spin on it.

Remember, be daring, be outrageous, but be safe and try to stay within the law. 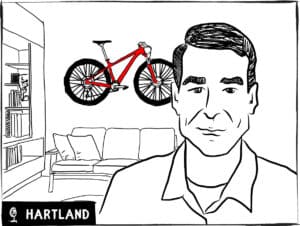