I’ve always been a big fan of talk radio. When I’m driving, sometimes to the chagrin of my passengers, the radio is glued to the AM dial. But I was a late adopter of podcasts. The first podcast that was recommended to me by a friend was This American Life, which is excellent and has been a mainstay in my weekly rotation. Then I found Serial, the real life crime drama whose first season features some of the most compelling storytelling ever. From there I branched out and have dabbled in dozens if not hundreds of different shows. In this blog entry, I’ll be discussing my top 3 favorite podcasts that have a business-related theme and why you should listen to them.

Under the Influence is a marketing podcast put out by the CBC. For our unacquainted readers, the CBC is Canada’s government-funded broadcast network, akin to the BBC in England, and they are frequently criticized for having lack luster television programming. However, the CBC puts out exceptional podcasts.

There are a lot of marketing podcasts. But frankly most of them are quite boring, and they’re often put out by a marketing agency who is more concerned with self-promotion than storytelling. The host of Under the Influence, Terry O’Reilly, has a real knack for describing famous marketing campaigns in a conversational tone without resorting to buzz words. He does a great job of researching his topics, and connecting unrelated stories under one common theme. He’s like the marketing professor you always wished you had.

Planet Money is an NPR show that was founded during the midst of the global financial collapse in 2008. Their initial episodes aimed to explain for the layman what had happened in the economy to cause the recession. Over time, they branched out to cover all sorts of stories relating to economics and business.

I know, I know, economics is boring and you probably don’t want to hear people drone on about supply and demand. But what makes Planet Money so special is they take complex economic topics and present them in an entertaining and palatable way. They turn a mundane and unapproachable topic like economics into highly entertaining short stories. If you enjoy thinking about economics but don’t want to induce a headache, then Planet Money is for you.

Recommended episodes: There are so many good episodes of Planet Money, and they are all worth listening to. Some of the best ones are: ‘Episode 390: We Set Up An Offshore Company In A Tax Haven’ and ‘Episode 657: The Tale Of The Onion King’. And recently they had an ambitious 5-part series all about oil, where they physically buy a small quantity of crude oil and walk through the entire process of transporting it, refining it, and selling it.

The Startup Podcast was founded by former NPR host Alex Blumberg, who worked on the aforementioned This American Life and Planet Money. He left his job at NPR to start his own podcast network: Gimlet Media. The first season of Startup follows Alex and his business partner Matt Leiber as they struggle through the process of forming their new company and raising money from investors. The show is almost honest to a fault. You get to hear Alex’s awkward conversations with his wife, where they discuss whether it was a good idea for him to have left a well-paying and stable job to pursue his dream, and the implications for their home life. You cringe as Alex fumbles through his first attempts at an elevator pitch when meeting big-time Silicon Valley investors. You empathize with their early employees’ depictions of being burnt out from long days in the office. As someone with one failed startup under my belt, I really enjoyed the chronicling of the challenges faced by entrepreneurs. Season 1 of Startup is a brilliant piece of work and a must-listen for anyone thinking of starting their own business.

Spoiler alert! Startup recently concluded their third season, which is indicative of how the company has endured after their initial struggles. The 2nd season followed two young women as they set out to become the “Uber of online dating”. This was of course before Tinder changed the dating game. The third season changes format slightly, and devotes an episode or two to a handful of different startups. It’s amazing to see how much Gimlet Media has grown from their early struggles. They now put out a fleet of excellent shows, including Reply All, Mystery Show, and Surprisingly Awesome.

Recommended episodes: It’s tough to recommend any one particular episode of Startup, because the first two seasons are sequential and to fully understand the story you have to start at the beginning. My favourite was definitely the first season, but both are great. My favourite episode from the third season was ‘Pirate Needs Pirate’, which features the eccentric owner of Pirate Joe’s, a Vancouver, B.C. based company which buys products from Trader Joe’s stores in Washington State and brings them across the border for sale in Canada. Trader Joe’s is not happy about this cross border arbitrage, and bans Pirate Joe’s from purchasing products. It’s hilarious and inspiring to hear the extreme measures that Pirate Joe’s has to take in order to secure their inventory.

I hope I’ve piqued your interest with some of these podcast suggestions, and have provided some audio fodder for your daily commute. I also hope you enjoy them as much as I do.

If you are interested in advertising opportunities for these shows, or for other podcasts, please do not hesitate to reach out to me at devin@ebridgemarketingsolutions.com. 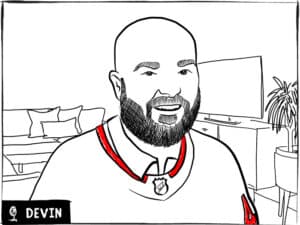